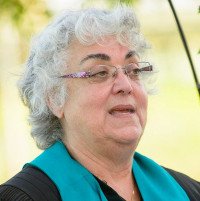 Rev. Balof grew up in Clarksdale, MS, where she was very active as a United Methodist young person. She attended Millsaps College in Jackson, MS, where she majored in religion. She then spent two years as a short-term United Methodist missionary doing campus/urban ministry at VCU in Richmond, VA. After her seminary training at Candler School of Theology at Emory University in Atlanta, Rev. Balof was director of an inner city ministry in Atlanta, then was Regional Director of Middle East Peace Education Program for the American Friends Service Committee.

After a close friend “came out of the closet” and could not be openly gay in the United Methodist church, she realized she could not be part of a ministry that did not welcome all people. Rev. Balof embarked on a search for a faith tradition that truly affirmed the “inherent worth and dignity of all people.” After some years of searching, friends introduced her to Unitarian Universalism—a profound gift. Realizing she had found her religious home, Rev. Balof went through a three year process to change her ordination from United Methodism to Unitarian Universalism. In 1997 she received Final Fellowship as a Unitarian Universalist minister.

Rev. Balof has three adult children who live in Athens, GA; Hillsborough, NC; and Greensboro, NC. She also has two granddaughters and is happy to share their pictures with interested folks.

Rev. Balof loves travel, seeking to learn from people about their cultures, beliefs and perspectives on life. She likes reading, spending time with family and friends, trying to learn Spanish and having new adventures. In recent years her spiritual journey has taken her into an exploration of the Sufi path brought to America by the Sufi mystic Hazrat Inayat Kahn and learning from the Aramiac scholar Neil Douglas-Klotz. Rev. Balof is also always game for a road trip and particularly likes traveling in Latin America.