Katrina Castanes has been the DRE of First UU for the past 9 years, beginning part time in January of 2011. Now 3/4 time, Katrina facilitates classroom organization, teacher orientation, curricula and events for ages infants through high school. Katrina also has organized and facilitated "Hogwarts Summer Term" during the summer months in RE at First UU. This has been a highly successful way of merging the wonderfully inspirational adventures of Harry Potter and friends into an interactive learning experience based upon the 7 UU principles.  Most recently she facilitated the online Summer in the Shire!

Katrina completed certification in the Virginia Cooperative Extension program, Project Learning Tree and hopes to utilize this program's sustainable living skills into the RE program as well. She has a BA in historic preservation from the University of Mary Washington and has worked as children's education coordinator and docent coordinator at both Thomas Jefferson's Poplar Forest and Historic Sandusky.

Katrina is also a belly dance instructor and writes children's stories and fairy tales. Her story, "The Faery Who Dared to Belly Dance" appeared in issue #24 of Faerie Magazine in 2013. Katrina has been married to Jim Castanes for 26 years and is the mother of three adult children, Nick, Chris and Sara and a feline familiar named Naomi. 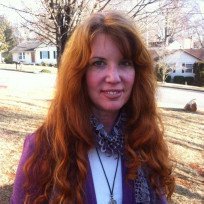